Well done to those children who performed during the area bands annual celebration on Tuesday 10th of March. Miss Hillary was singing your praises, telling all who would listen what a fabulous performance you put on.

How exciting the children will be performing at Bulwell Academy!

Area Band children will be taken there by school staff as it is their usual Area Band night!

The doors open at 4:40pm and the concert is FREE!

There are donation buckets if anybody does want to put a little something in.

Christmas in the City

Wow what an evening!

The area band children had the exciting opportunity of performing on stage alongside other musicians from various Nottingham schools. They were able to put all their hard work and practice into this exciting performance at the Royal Concert Hall. The children proudly showcased their guitar skills to a full audience, but in particular their adults who had come to watch them and they were absolutely brilliant!

The children were impeccably behaved and made Old Basford PROUD! They had such fun when they were on stage playing their guitars and really got into the swing of it. They soaked up the atmosphere and immersed themselves into everything that was on offer during the evening. They were seen nodding their heads, tapping their feet and hands to the beat, what a joy to see. Furthermore, got to hear one of the finalists from a school choir competition sing and they joined in with some well-known songs themselves.

A great night had by all!

Some kind words from Hanna Barrs from The Music Hubb

“The concert itself was a triumph - all of the choirs and ensembles made the stage their own and performed with a confidence beyond their years.  It's impossible to pick out a highlight because the overall standard was so high: suffice it to say that feedback from the audience about every aspect of the concert has been extremely positive.”

Most of the pieces played during the concert were recorded, and we are going to include some of them in our Musical Advent Calendar please check out this link if you would like access to the songs that were sung and performed.

Mrs Kelly our new Music Lead is in charge of organising pupils to take part in Area Band. She is assisted by Miss Hillary who will take a number of our pupils each Tuesday evening after school to another local school to play in a Nottingham City Young Persons Orchestra!

HOW AREA BAND WORKS
AREA BAND IS A FOLLOW ON OPPORTUNITY FOR YEAR 5 & 6 CHILDREN WHO STARTED TO LEARN TO PLAY THE GUITAR IN YEAR 4 AND WOULD LIKE TO CONTINUE TO PLAY AND GROW AS A MUSICIAN.

AREA BAND RUNS THROUGHOUT THE YEAR. IT IS FULLY FUNDED BY SCHOOL AND FREE TO ANY PUPIL WHO WOULD LIKE TO ATTEND!

PRACTICE SESSIONS OCCURRING ON A TUESDAY AFTER SCHOOL AT ROBIN HOOD PRIMARY. THERE IS A COACH PROVIDED TO TAKE AND BRING THE CHILDREN BACK. THE CHILDREN ARE SUPERVISED BY A MEMBER OF SCHOOL STAFF AT ALL TIME, WHILST MUSIC PRACTITIONERS FROM NOTTINGHAM MUSIC SERVICES OFFER THEM THEIR EXPERTISE - PLEASE SEE THE LINK AT THE BOTTOM OF THE PAGE FOR EXACT DATES.

EACH YEAR, AREA BAND MEMBERS HAVE THE OPPORTUNITY TO SHOWCASE THEIR TALENT BY PERFORMING IN HIGH PROFILE CONCERTS/VENUES THROUGHOUT THE CITY, SUCH AS ‘ XMAS IN THE CITY’ AT EITHER THE ROYAL CONCERT HALL OR THE ALBERT HALL, AND ‘LIGHT NIGHTS’  AT ST PETERS CHURCH IN THE CITY CENTRE.

Christmas in the City 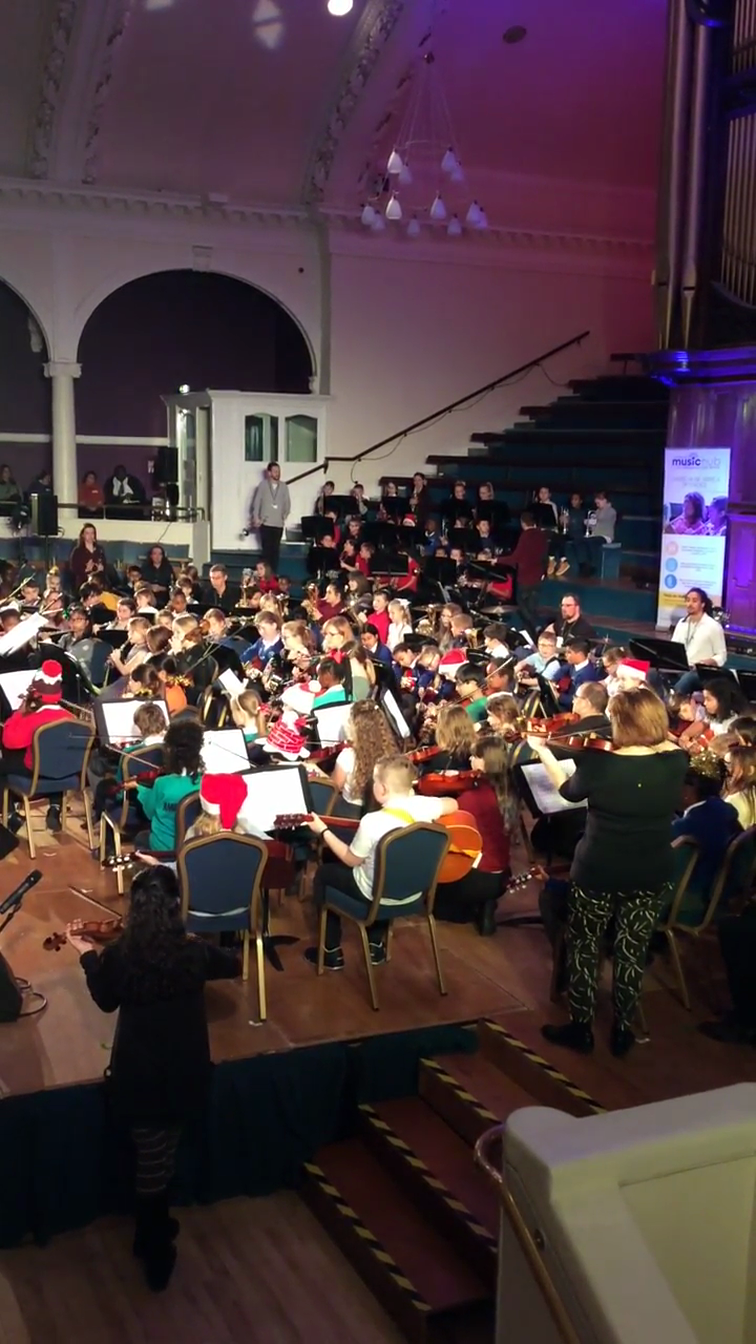