After School Maths Tuition starts for certain pupils until 4.25pm.

Welcome back everyone and Happy New Year! We hope you are looking forward to this term and all the exciting things we have planned.

Our topic for the term is:

Have a look at our Knowledge Organiser for this half term below!

Our text for this half term is 'Skellig' by David Almond and we will also be supporting our understanding of the book by watching the film.
Topic homework will be given out on Tuesday 14th January and will be due in on Tuesday 4th February giving you 3 weeks to create something spectacular!

As part of our Design & Technology work, we designed our own 'rooms' - the children came up with ideas such as bedrooms, living rooms, banks, museums and many more! The children had to design a circuit which incorporated an alarm when a door or window was opened. Some children even managed to include 2 alarmed entrances and a security light! Check out our FANTASTIC projects below!

Today we were lucky enough to have 'THE EXPLORER ACADEMY' in Year 6 to deliver a MAYA WORKSHOP to enhance and enrich our topic for this half term. This workshop was delivered by a fantastic man called Simon who is a real life jungle explorer! We spent the whole day learning all about the area in the world that the Maya were from - Central America. We worked in 10 teams all day and we took part in some team building activities. We learnt about what life was like in this tropical climate for the Maya including looking at the dangers that they would have faced. We looked at the Maya number system and the glyps that they used for writing. Some children were lucky enough to get dressed up in Mayan costumes!

On the 6th and 7th November, both Year 6 classes had the exciting opportunity to visit Hatikvah Synagogue. To enhance and enrich our topic on World War Two and the Holocaust, we completed a theme week on the religion of Judaism. It was fantastic to bring this topic alive and visit a real synagogue. We were met by Moshe Goldshtein who welcomed us into his synagogue and explained to us about the history of Judaism. We had the opportunity to look at the Ark where the Torah is kept and Moshe brought the Torah scroll out so that we could look at it close up. We also looked at some Tallits (prayer shawls) and the children had the chance to try them on. The children listened extremely carefully, asked some thoughtful questions and came away with a wealth of knowledge about the Jewish religion. We would like to thank Moshe and the Hatikvah synagogue for making us feel so welcome.

We were OVERWHELMED with the efforts the children made with their World War Two topic homework projects. We had such a variety of work including Powerpoint presentations, models of various aircrafts and tanks, an evacuee suitcase, models of Anderson shelters and many more! Well done to all the children and their families who helped create such FANTASTIC work. Come and have a look at a selection of some of the projects... 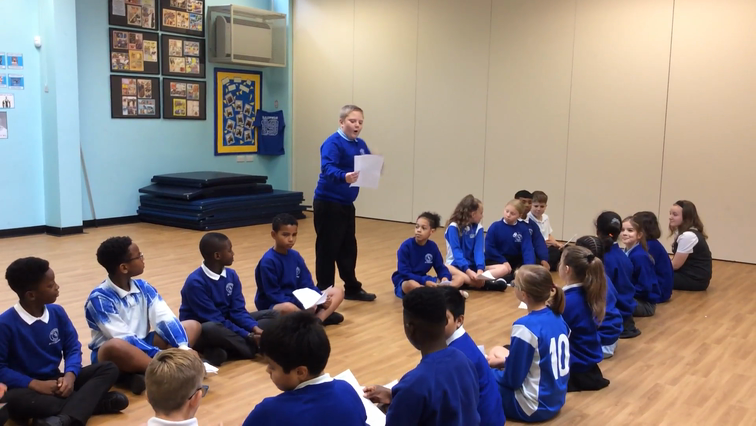 This morning Y6 showcased their superb acting skills in our Literacy lesson about Winston Churchill. We as classes recreated one of his most famous speeches 'We will NEVER SURRENDER!' The children have all been enthralled throughout our WW2 Topic this half term which we are delighted about!

Have a look at our Knowledge Organiser that we are using in Year 6 this term! This gives details of all the 'knowledge' the children need to know whilst studying this topic.

We had an EXCELLENT D&T morning today in Year 6 making our Anderson Shelters! Lots of parents came to join us in the hall for creative fun! We think that some of the parents enjoyed it more than the children did! We are looking forward to painting them when they are dry.

On Wednesday 9th October, all of the children in Year 6 were lucky enough to meet a surviving World War II evacuee. Joan Leverett, who was evacuated twice from Dagenham during the war, came into school and spent an hour sharing her experiences and answering questions from the children. We were so lucky to have been able to meet someone with such an interesting life story.

What a FABULOUS time we had today celebrating OBS being 50 YEARS OLD! To go with the theme of 'FLYING HIGH AT 50', we worked in pairs and made kites! We even had a couple of parents come into class to help! The children spent nearly two hours in the morning making some BRILLIANT kites and we had a go at flying them in the afternoon. Have a look at our pictures below!

Today, all of Year 6 visited the Holocaust Centre near Newark. We had a fantastic day and went on 'The Journey' which follows Leo Stein, a Jewish boy living in Berlin in 1938 when Hitler and the Nazi's were in power. We learnt about the humiliation and discrimination that Leo suffered because he was Jewish. In the afternoon, we were extremely lucky to meet Simon Winston who is an 81 year old survivor of the Holocaust. We listened to him speak for over an hour about how him and his family escaped Poland because they were Jewish. We then had the chance to ask him some of our own questions. A BRILLIANT DAY was had by all - the children were exceptionally well behaved and we were proud of every single one of them. Many of the staff who work at the Holocaust Centre complimented the children on their behaviour and their knowledge of World War Two.

Today (10th September) we had a WOW day to introduce our topic of World War Two. We watched clips of air raid attacks, listened to sound clips and worked in pairs to figure out the countries that were involved and who their leaders were. We then went into the hall to great a large physical map and moved around to demonstrate who invaded who and who. Have a look at some of our pictures!

Dates for your diary

What Year 6 will be learning about this year